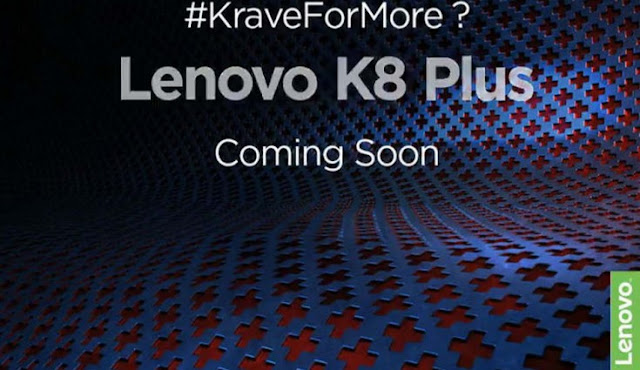 Lenovo recently launched a new smartphone for its K series after the Pure UI was finished with the stock Android interface. Prior to the launch, Lenovo had the news of working on another 8-plus series of smartphones. This smartphone was also listed on a benchmark listing website. Lenovo India has confirmed the launch of its K8 Plus smartphone on Twitter. Simultaneously, Flipkart also officially announced that the smartphone will be introduced on September 6 and will be available exclusively on an e-commerce website.

On Tuesday, Lenovo India posted a teaser video of the 8 Plus on Twitter. In this teaser, a different media button is visible on the left side of the smartphone. The video teaser ends with this tagline, “Do you look at your smartphone and always #KraveForMore? It’s time to end that with new and powerful #LenovoK8Plus. Coming soon!”.

Flipkart said in its release that the upcoming Lenovo K8 plus will be a mid-range smartphone. However, the exact information of the price of the phone will be revealed at the launch itself. Lenovo will also stock Android with the latest Nougat version in this phone. Nonetheless, Flipkart says that the smartphone is expected to have a dual rear camera setup. According to Flipkart, the Bokeh effect has been shown in a teaser released on social media. However, until this article was written, we did not see any such post on Lenovo’s social handles. Lenovo’s 8 note has a dual-rear camera and it seems that with a similar feature it will be Lenovo’s second smartphone.

As we said, Lenovo’s 8 Plus was seen on the Benchmarking website Geekchain. This listing revealed the specification of the phone. The smartphone features Android 7.1.1 Nougat, 1.7 GHz MediaTek Helio P25 (MT 6757 CD) processor. Lenovo’s 8 Plus Benchmark listing also revealed that the phone had 3 GB of RAM.

How can I Make Money from Blogging?