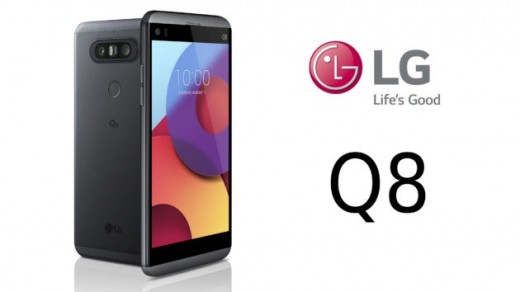 Last month, LG launched a small variant Q8 of its V20 smartphone in Italy and at the time the company did not reveal the price of the handset. But now, the company has revealed the price with the introduction of the LG Q8 phone in South Korea. On Thursday, LG launched its Q8 smartphone in South Korea for the price of 6,16,000 Korean won (about Rs 34,950). And the company announced that this phone will be available in Urban Titan and Sweet Pink Color in Korea.
Remind that LG Q8 is a mini variant of LG V20 in a way that has a small screen. The key feature of the new Q series smartphone is the secondary screen and a rear dual camera setup given in it.
LG Q8 has a 5.2-inch quad HD (1440×2560 pixels) IPS LCD display that comes with Corning Gorilla Glass 4 protection. The pixels of the screen are density 554 ppi. The phone has an ‘always on’ secondary display that comes with 160×1040 pixel screen resolution. This phone runs on the company’s Android 7.0 based LG UX 5.0. Remind that LG V20 was the first smartphone that was launched last year with Android 7.0 Nougat.

The phone has a Qualcomm Snapdragon 820 processor and 4 GB LPDDR 4 RAM. This phone has 32 GB inbuilt storage which can be expanded through MicroSD card.
LG Q8 has a dual rear camera setup that comes with 8-megapixel sensors with aperture F/1.8 and 13-megapixel sensor with F/2.4 aperture. This phone has a 5-megapixel front camera with aperture F/1.9. The phone has 3000 mAh battery. Talking about connectivity, the phone has features like Wi-Fi 802.11 A / B / G / N / AC dual band, Bluetooth 4.2 and USB Type-C. LG Q8 comes with IP67 certification that means the phone will not be harmed if it lasts for 30 minutes in 1.5-meter depth water. On the rear of the phone gave a fingerprint sensor under the dual camera setup. This smartphone has an infrared ammeter. Like LG’s other high-end device, LG Q8 has a 32-bit quad-dace support. The dimensions of the phone are 149×71.9×8 millimeters and weighing 146 grams.