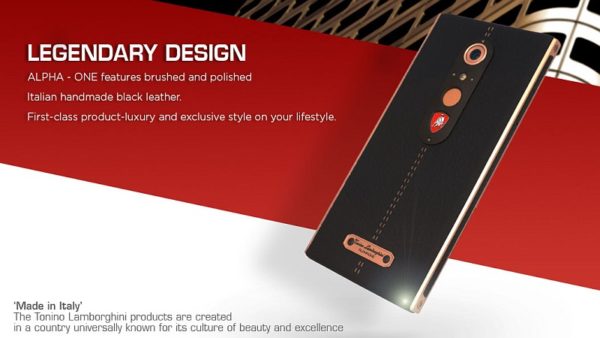 Everyone is waiting for iPhone 7 and Samsung Galaxy S8 to buy because of its features and its design. But one of the luxury car maker company, Lamborghini is launching its smartphone which is named as “Lamborgini Alpha One Luxury”. But we learned from the past that people don’t care about these type of luxury smartphones anymore. A few weeks ago, Vertu a British Smartphone manufacturing company had an auction of their inventory because they are bankrupt. Because no really care outdated, luxury smartphones anymore.
Now luxury Car manufacturing company Lamborgini launches their luxury smartphones Lamborgini Alpha One in the market. This new “Alpha One” price at $2,500 which is equal to approx Rs 1.6 lakh in INR. Lamborgini announced that it is available on its website and this smartphone is available for international market too. At the back side of Alpha One smartphone an Italian handmade black leather finish by hand. The company says that Alpha One phone body is made by ‘ Liquid Metal ‘ which is equally stronger as Titanium Alloy.

Let’s discuss specification of this smartphone, Lamborgini Alpha One is powered by Qualcomm Snapdragon 820 coupled with Adreno 530 GPU. It has a 4GB RAM with 64GB Inbuilt internal storage. Alpha One has microSD card slot in which user can expand storage up to 128GB. Alpha One runs on android 7.0 Nougat. Lamborgini Alpha One smartphone has 5.5″ inch WQHD display screen.
Lamborgini Alpha One has a 20MP camera at the back with flash and 8MP camera at the front. Users also got a fingerprint sensor at back. It has Hi-Fi processor along with AKM 4490 Hi-Fi audio amplifiers. Every phone is packed by an Italian leather sleeves phone case with charging cable. AKM 4490 Hi-Fi amplifiers have very good sound quality as compare to other smartphones speakers.

This is not the first one, Lamborghini also launched a smartphone approx 2 years later that is named as “Lamborghini Tauri 88”. This device is almost having the same specs or you can say just slightly lower than this and that cost at $6000. As compared to Tauri 88, Alpha one is still cheaper as per its price but still not for the customers.

Summary, Lamborgini Alpha One too expensive as compare to other smartphones like iPhone 7 and Samsung Galaxy S8, it has a totally double price and also not worth as per the specifications of this device but still, Lamborghini lovers will definitely gonna purchase this and those who have a Lamborghini car along with this device will definitely give a royal expression to others.