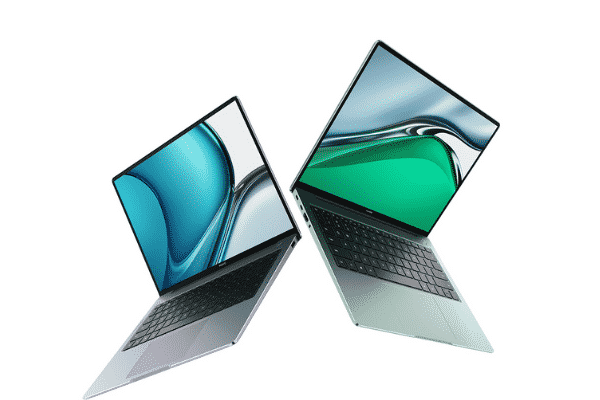 Huawei has just unveiled the MateBook 14s, which joins an already expanded line of laptops. We were able to take it in hand and tell you all about its characteristics before it goes to our lab for a thorough test.

After the MateBook, MateBook D, and MateBook X Pro, it is the turn of the 14s to be added to the catalog of Huawei laptops. This high-end model is also likely to overshadow the X Pro given the qualities it offers.

The webcam is finally in the right place

The design resumes the codes of the series with its anodized aluminum frame and its thickness of 16.7 mm. Apart from the location of the webcam, little has changed. Indeed, Huawei has finally abandoned the webcam at the keyboard level in favor of the classic front location. Good news, especially since the borders are still very thin. The model you see in the photos is Spruce Green, but it is still available in Space Gray and Mystic Silver.

Intel Evo certification (but not for all)

In terms of components, the computer is Intel Evo certified – which guarantees it interesting performance and endurance – but only for the most expensive model, equipped with a Core i7-11370H and offered in gray only. Huawei didn’t go for a U-series processor but instead set its sights on Intel’s H-series (11th generation Core), chips typically intended for thicker PCs – offering increased performance. It remains to be seen how the frequencies behave in heating and if the results are there. The computer also has 16 GB of RAM and a 512 GB or 1 TB SSD. Also, note that a slightly cheaper Core i5 version will be available.

We keep the beautiful screen (here 2.5 K) in 3: 2 format which offers a diagonal of 14.2 inches, but this time the refresh rate goes to a maximum of 90 Hz. The scrolling of a page s’ In theory, therefore, turns out to be more fluid than with the classic 60 Hz, but in fact, it is hardly noticeable. Video games could benefit from this, but without a dedicated graphics card, the PC isn’t too great for exercise. You can manually select the refresh rate between 60 and 90 Hz or let the PC choose automatically depending on the applications.

The connection is rather provided for an ultraportable with two USB-C ports, 1 USB-A, 1 HDMI, and a mini-jack. Unfortunately, the Thunderbolt is only part of the certified Evo model. On the others, however, the USB-C ports support DisplayPort. Finally, the 90W charger is supposed to offer 3 hours of operation with just 15 minutes of charging, which is faster than the minimum required by the Evo certification (4 hours for 30 minutes of charging).

We were able to manipulate the MateBook 14s for a few moments. This ultrabook is a beautiful machine, with neat finishes with the bonus of a 90 Hz screen with a huge and very pleasant occupancy rate. Depending on the performance it delivers, the PC could well compete with the best!