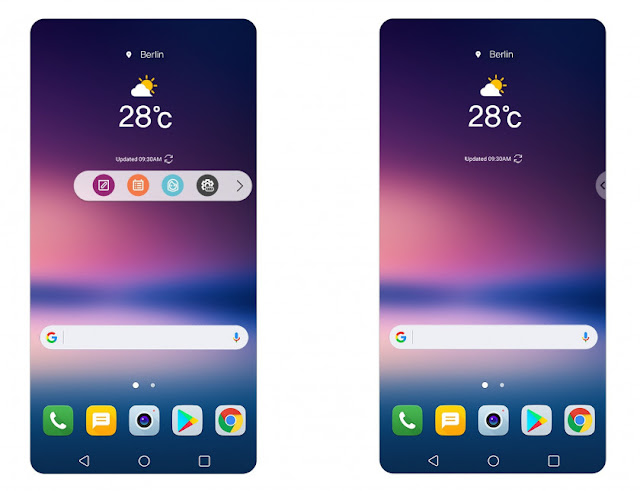 LG V30 smartphone will be launched on August 31 before the IFA 2017 event, but there is still some time remaining in the launch and smartphones have once again got new information. The LG V30 smartphone has been revealed to be launched in two variants – Regular and Plus. Also, prices of both variants have been leaked and it shows that the price of regular variants can be lower than last V20 at the time of launch. In addition, the company has announced that the upcoming flagship smartphone of the V series will have more personalized options for the user and also reveal about the LG V30’s secondary display.

The first thing to do is talk about LG’s official information, the company says that the V30 smartphone will be the company’s custom UI UX 6.0+,has been optimized to work better with OLED Fullvision Display (18: 9 aspect ratio). The company also said that the user will get more personalized options in UX 6.0+.

Where all the leaks came before, it was revealed that LG would not have a secondary display in the new phone. Note that the secondary display was given on the previous version of the V series. The company has now announced that it will now be converted into a floating bar. Floating bar is semi-transparent and through this the user will be able to access many functions quickly. According to the company’s press release, the floating bar will be used while not using the fullvision display.

LG said in its release, “When power off, Alway-On display is much more customizable than before. Apart from viewing time on the Always-On Display, Quick Tools, Music Player and a Private Picture can also be viewed. “

LG V30 has a dual camera setup on the rear, UX 6.0+ is designed according to the hardware. Graphy tools can be accessed through manual mode, this will give more users interested in photography. The company said, “With Graphy, users can choose photos from the portfolio of professional photographs, each of which will have a different style and mood, or even choose from the graphy website or professionally taken photographs from the mobile app. You can apply alternatives like metadata preset such as white balance, shutter speed, aperture and ISO. “Remind that LG has recently confirmed that LG V30 will rear camera with aperture f / 1.6 and so far is the “clean” lenses in this smartphone.

Talking about leaks, a report from reputed tech website revealed that the South Korean company is planning to launch LG V30 Plus smartphones in addition to a regular variant on August 31. In addition to the Plus variant, 6 inch OLED Full Vision display can be given in the LG V30 and V30 Plus. According to the report, plus variants will have 128 GB storage whereas regular variants will have 64 GB inbuilt storage. The main difference between regular and plus variants has been revealed in audio department and wireless charging capacity. Nonetheless, it is not clear whether any of these variants will have these features.

Poco C3 Is Launching On October 6th In India