Everything about whatsapp Dark Mode till now. 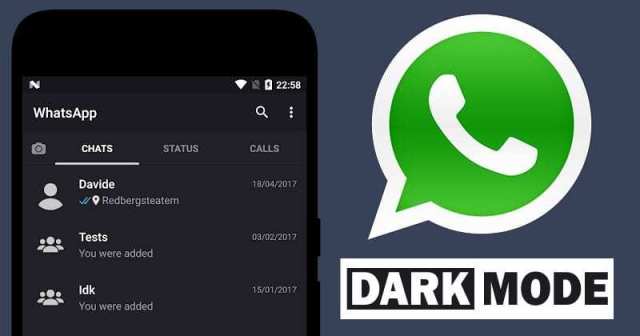 Recently, Whatsapp has rolled out a new update for the WhatsApp Beta in iOS, with few new features like Dark Mode & Call waiting. It should be live in the official update which will be version 2.20.10 and shall be available via the App store. Similarly, Whatsapp is doing this for the Android beta, which will come with a bunch of new features, including the Dark Mode. Still, we don’t have any confirmation about this when the Dark Mode for WhatsApp will roll out for all users.

A few days ago, WhatsApp beta has updated along with some changes to the Dark Mode. They made some improvements to the Dark Theme and now the option has been moved the feature to “Chats” Settings. Dark Mode is one of the most-awaited features from WhatsApp and is expected to be unveiled on Android as “Dark Theme”. Along with that WhatsApp’s latest beta update has introduced new skins for six emojis. Whatsapp has also moved its Wallpaper section to the setting inside the Chats option.
WABetainfo is also reported that the new Dark Theme feature is being tested extensively to iron out any possible bugs. They also said that the WhatsApp is continuing to add new features for the Dark Theme before the release. WhatsApp Dark Mode feature will support Android 9 or older versions of the Android will be automatically tied to the users’ smartphones’ battery levels. It means the Dark Mode will be automatically enabled if the smartphone is running on a low battery and it will disable when it has enough charge.

WhatsApp has also introduced a call waiting for the feature to the stable version of Android. After the launch of the feature, WhatsApp users can use Whatsapp calling as same as their cellular calling. They can now see when someone is calling them or when they are on another voice call and they can accept or end the incoming call.
Share4Tweet2Send