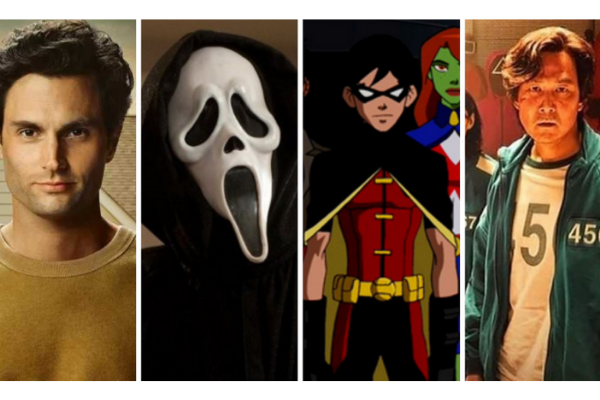 October is heading towards its final stretch and we are already beginning to notice a change in what Brazilians have been doing marathon. So much so that we have some news appearing on the list of most watched series of the week in Brazil, especially with the premiere of the third season of Você . And the proximity to Halloween and the release of the trailer for the new movie in the Scream franchise also boosted the series.

In addition, the arrival of new episodes of Young Justice on HBO Max has made the animation of the teenage superheroes of DC also featured in the weekly rankings. Of course, all the hype for the films of this universe created at DC Fandome gave that little help, but there’s no denying the quality and popularity of the show — which was canceled a few times and was rescued thanks to the insistence of the fans.

All of this caused the almighty Round 6 to step on the brakes a bit. After a few weeks topping our list of most-watched series, the South Korean series had a slight drop, which indicates a slight drop in audience interest. Basically, everyone watched this story and now it’s time for other productions to stand out. Still, the most watched series in Netflix history remains very popular.

It is worth noting that there is still no official tool to measure the audience in series on the services and that the best way to do this measurement is from JustWatch, a platform that helps users find what to watch and also on what stream the content is available.

So, based on these data, we arrived at an approximate ranking of which series were the most watched by Brazilians in the last week.

The classic police investigation series fell back into public interest for a very simple reason: a few seasons just made it to HBO Max, so a lot of people took the opportunity to revisit the plot. Originally released in 2000, the series was largely responsible for popularizing productions focused on criminal investigations and gave rise to several spin-offs.

The plot follows the troubled daily life of a group of Las Vegas investigators who analyze the places where crimes were committed, combining different methods of investigation with experience and instinct to solve cases ranging from shoplifting to child abuse. For this, they will count on the help of the highest technology (at the time, let me make it clear) and the wit of their protagonists to find clues and identify the culprits. It’s highly addictive.

9. Only Murders in the Building

With extremely charismatic characters, Only Murders in the Building is one of the biggest successes of Star+ in its debut in Brazil. Starring Selena Gomez, Steve Martin and Martin Short, the comedy tells the story of three strangers who find themselves involved in a crime in the middle of New York. After the mysterious death of a neighbor, they need to incarnate detectives and find out what happened.

The highlight here is the actors’ chemistry, which makes this somewhat unusual mix of cast work so well that it traps the viewer episode by episode.

The new horror series from Netflix arrived already highly praised and the Halloween atmosphere propelled the success. Midnight Mass brings a combination of elements that we love in stories of the genre: mysteries, dark stories, the arrival of a religious and that atmosphere that there is a great secret being kept by everyone.

The story revolves around a young priest who has just arrived in a small town. What he doesn’t know is that the place is full of traditions and secrets that the population is not keen to reveal and that will inevitably cross his path.

Dragon Bal Z is a timeless phenomenon. Although the series ended nearly 30 years ago and was rerun to exhaustion by several stations in Brazil, it continues to be watched with an absurd frequency by Brazilians. No matter how much time passes, Goku’s saga continues to be the true owner of the hearts of the Tupiniquin otakus.

For those who have never watched the anime, the story is quite simple: a group of ultra-powerful warriors fight to protect Earth from alien invasions. With each new saga, some threat appears to try to dominate or destroy the world and Goku and company solve everything based on punch, kick and special powers. The great charm is in the humor that is built around it all thanks to very charismatic characters.

As a bonus, Toei Animation brought the first teaser of the new feature . With an unprecedented story, new villains and a new art style, the curiosity surrounding the ad became an additional spice to nostalgia.

New episodes of You hit Netflix and it soon became one of the most watched series of the week. Also could, since the second season ended in a surprising way and completely changed the dynamics of the stories.

Without getting into these spoilers, You — or You , to avoid confusion — follow the life of Joe, a character played by Penn Badgley, a murderer who “falls in love” and becomes obsessed with women, willing to commit even the most brutal crimes to make the relationship works.

The noise caused during the 2021 Emmy made the Brazilian discover and fall in love with Ted Lasso . The plot tells the story of a former football player who goes to England to coach a real football team, was a huge success on the platform and seems to have conquered audiences in Brazil and the world to the point of being a record audience .

And the recipe for success seems to be simple: instead of following a more pessimistic and cynical line of life, the story brings a more good vibes perspective that makes the protagonist’s journey a pill of lightness in the viewer’s day.

Round 6 broke all Netflix records in a matter of weeks. So much so that the South Korean series quickly became the most watched content on the platform worldwide. And what is the secret of all this success?

The series is a mix of battle royale with deadly games and all that craziness that only oriental stories can provide. The story deals with a strange game that hundreds of people decide to play: a survival game in which they can lose their lives.

In all, 456 people with debt and major financial problems enter the competition in hopes of solving their problems — or dying in the attempt. Thus, they are taken to an island to participate in children’s games and games, but with deadly consequences.

The slasher terror is back on the rise and proof of this is that the Scream series was resurrected by the Brazilian. Inspired by the famous movies that marked the 1990s, the new story begins after a murder brings back memories of Lakewood’s past crimes. With that, a new masked assassin begins to leave his trail of deaths while raising the doubt in the city: is the old serial killer acting again or did he just inspire a new assassin to commit crimes with the same modus operandi ?

And uncertainty is the perfect spice to create the tension needed for a good Panic . The highlight here is how he manages to tie the original films very well with the new story that is being told, modernizing several elements without giving up what made the franchise famous.

But no matter what the phenomenon is, one thing remains unchanged: horror is still the Brazilian’s favorite genre. And, in the month of Halloween, this would be no different and it was obvious that American Horror Story would once again appear on our list of most watched series in Brazil — even more so with the tenth season being aired weekly on Star+, allowing us to have new scares to follow.

The good news is, if you’ve never seen an episode of the show, you can go on to the latest season without a conscience. As it works in an anthology format, you can follow any of the years in isolation and still enjoy the scary atmosphere according to the theme you prefer.

Tired of being known only as little helpers to DC’s greatest heroes, Robin, Aqualad and Kid Flash decide they want to show that they’ve matured and deserve a spot in the Justice League. With that, they form their own team and set out on their own adventures — and they discover some great secrets.

In addition to the proposal to highlight characters often neglected in the comics, Young Justice becomes even more interesting as other characters enter the cast — including Superboy and Super Shock.

Is your smartphone getting update for Android O? Check Here!!!