Apple Watch Series 7, analysis: a small change in the screen, a big step in the experience 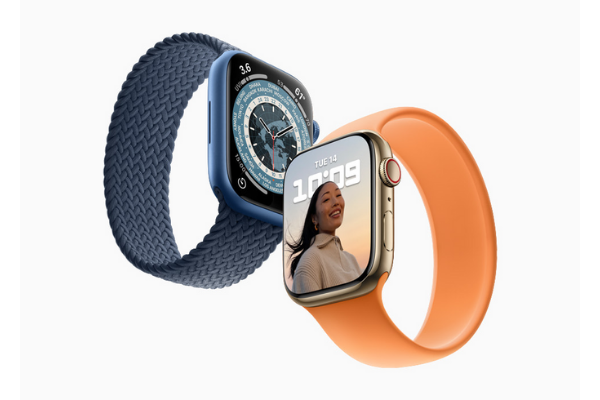 It seems that the sales data indicate that in the last year more smartwatches have been sold and with such a receptive market, manufacturers have continued to fill the window, including Apple.

The new smartwatch brings some changes that are noticeable externally, although it is not a too drastic evolution and does not meet those speculations that pointed to a radical design change. It boasts a better-used screen and maintains its assortment of sensors that allow it to record many values ​​of user activity and status. Let’s see how with him after a few days.

That the Series 7 is a copy-paste of the Apple Watch Series 6 at the level of forms is a success in terms of comfort: the semicircle that draws the side of the watch is pleasant to the touch and eliminates the possibility of annoying corners. The Series 7 indeed weighs a little more than the Series 6, but it is only noticeable at first and if we are used to this predecessor.

It is a well-built smartwatch and resistant to bumps and scratches, although this is something that we will have to verify in the long run. What we can attest to is its water resistance, without any operating problems and with the same system of the expulsion of water from the speaker due to hums and sounds (once we deactivate the lock).

Control is maintained by the rotating crown and physical button, located in the same way, being its correct pulsation. It should be said, as a reminder, that although the sphere is increased concerning the previous ones, the straps still fit, verified.

Although the sphere is increased concerning the previous ones, the straps fit equally

As for the screen, we see there several more or less noticeable novelties. The LTPO technology and the 1000 nits of maximum brightness are maintained, although the brightness of the Always-on or ambient screen has been increased to 500 nits. This will please those who see this function useful, although in the wrist-down position the screen is usually not much visible and also increases battery consumption.

It is best to have reduced the frames and increased the resolution. Both aspects have an impact on improving an experience with a panel that was already among the best that we see in a current smartwatch, without the sun or any other situation conditioning the experience (and with very good tactile sensitivity). Good contrast, good sharpness, and without oversaturation.

According to the brand, it is about 20% more screen area, which we will notice especially if we were already users of a previous Apple Watch and if we usually read long texts on the watch, such as an email or explanations in apps like the ECG. It is also noticeable if we are in the habit of placing a photograph as a sphere, perhaps in this case it is when we notice it the most, although in general, we can see some larger buttons such as those of the Control Center or those of the unlock code.

The screen options are still somewhat fair, although we see some more options in the “always show” (ambient screen). There is still no automatic brightness option (perhaps because of the need for a sensor) and in general, they are very similar to what we see in iOS for Apple mobiles.

Software and activity log: watchOS 8 is very familiar to us

The new version of the operating system was presented this year at WWDC following the tradition, along with the other software from the manufacturer. watchOS 8 had retained its appearance, interface, and navigation so that users who already use watchOS 7 will notice little change.

The sections of the system are still the home screen (or sphere), the notification window (swiping down), the Control Center toggles (swiping up), the app drawer (pressing the crown), and multitasking. (by pressing the lower button). As usually happens, there has already been a software update that we have been able to install on the Series 7, but at all times we had stable and fluid software.

As is often the case, there are new spheres. In this case, we have the most minimalist option (Contour) and the reloaded ones. Modular Duo and World Time, which allow more complications. Another novelty is the dial with portraits, but the fact that the watch remains behind the focused subject as the brand showed has not worked for us.

Speaking of the activity log, the Activity + Training + Health triplet is maintained. A combo that is much more comfortable to manage and consult from the iPhone, but whose data source continues to be the sensors of the Apple Watch.

The Training app adds some activities such as Pilates, Tai Chi, and HIIT (although the latter has not yet appeared). In general, it is an assortment that previously seemed quite complete to us (it even has curling), although paddle tennis lovers still do not have their sport reflected, and that there is even a racquetball racket. Except for these exceptions, in general, we will find our activity or we can use a similar one or compatible third-party apps.

The count in each training can vary (meters, repetitions, etc.) and with it the screen that is shown during the activity. The sections are also kept here, with the main screen (count, time, keystrokes, etc.), a small control center, and a multimedia playback screen.

The Activity app keeps the three rings, corresponding to hours of standing, minutes of exercise, and active calories burned, as well as the rewards for breaking records or completing challenges. In general, the information we have is useful and complete, although it does not reach the extreme of the Samsung Galaxy Watch 4 and its new indexes.

We have tried various activities to check the counts and found that Series 7 generally works well in this regard. The pool count (if we combine styles) is the only thing that maybe could have some small flaws (more or less, a rate of 1 pool/session) as it already happened in the Series 6 occasionally, but in general, it is accurate with the counts and the information is perfectly visible at a glance.

Features that can still differentiate Apple Watch from the competition, such as electrocardiogram (ECG) and blood oxygen saturation measurement, have been retained. The measurement system is the same, being able to carry out measurements at will or to consult those that the clock does by default in a continuous way as continuous monitoring.

As we always say, it is not a medical device, and when in doubt we will always have to consult a professional. But it is a device that can give us some indication and that can be used to have a merely indicative follow-up. We can also add external data, such as power.

The sleep record has also seemed quite accurate, it may not be as intuitive as it could when managing the sounds or alarm options if they depend on this feature (corresponding to the Health app). In any case, the information it shows is useful if we are interested in controlling our hours and quality of sleep, with the level of drowsiness and heart rate.

The altitude has its sensor from Series 6 and it still seems to us that the measurement is quite accurate. What has taken us to work well is the detection and notification of handwashing, something that already happened in the first versions of watchOS 7, although finally it warned and registered us.

Autonomy: without lowering the bar

One of the novelties that attracted the most attention was, precisely, outside the clock (so to speak). The Series 7 introduces fast charging in Apple smartwatches, which was expected to improve the experience not so much in autonomy, but in charging time.

The result is practically 33% less time, that is, from the hour and a half that it cost us to charge the Apple Watch Series 6, we spend an hour to complete the charge. It is an improvement that is appreciated, especially since we reach 50% charge in less time (and especially if we are not charging the Apple Watch at night).

We have alternated days with “always show” activated and deactivated, as well as days of more activity log (more than 60 minutes) and others less (up to 45 minutes), also with simpler or more complex spheres (the more active complications, more consumption). The result is an average of 36.3 hours, with 41 and a half hours with the longest charge and 28 with the minimum. Something that reflects the notable influence of having or not having the “always show” activated, as we already saw in Series 6.

Taking into account that here we play in the league of smartwatches with more or less daily charging (and not in the Huawei until the Huawei Watch GT2 Pro ), it is not a bad experience by any means, although it is not competitive considering that even the Huawei Watch 3 (with which they have sacrificed super autonomy for other benefits) has two days on average. It is more or less tied with the Watch 4 and very close to the Series 6.

There was a lot of speculation about Apple’s new smartwatch, as is always the case with every product from one of the major manufacturers. There was talk of breaking with design, of functions that would have been differential, of new sizes that made the most avid strap collectors pale. But in the end, the Series 7 is a Series 6 with a mask .

The Series 6 turned out to be a complete smartwatch that added its functions that we did not see in the competition. The Series 7, for its part, has not offered that novelty that could have followed in the wake of its predecessor, opting for timid additions such as the Mindfulness function and a redesign of the front that allows you to see more content .

In terms of autonomy, it is still in the same group of smartwatches that are almost charged daily (that is, far from those that arrive or exceed the week), and globally it is a very good smartwatch whose sin is neither to perform poorly nor to have any defect but to be almost the same as its predecessor. Perhaps it is the best Apple Watch to date, as the usual joke of the CEO of the brand says, but to us, it has seemed more like the best Series 6 to date.