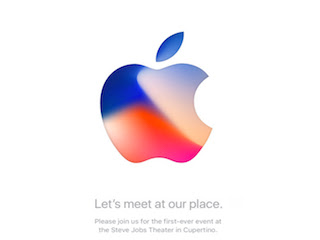 As per the expectations, Apple confirms that their next generation Apple iPhone 8 will launch on September 12. Apple also added 2 upgrade models in iPhone 7 series which is named as iPhone 7S & 7SP and a new wearable Apple watch that can support SIM card and LTE. Recently, a news came up for the Apple iPhone 8 launch which is scheduled on September 12 but Apple didn’t send the invitations to press, but today, Apple sent the invitations to press for the launch event at Apple’s new Apple Park campus on September 12.

Apple made this invitation very simple by writing a simple line “Let’s meet at our place”, Apple didn’t mention anything else in the invitation note. As expected, Apple confirms this launch at Steve Jobs theater and that is in Apple’s new campus. According to the note, it seems that Apple is going to show something special with iPhone 8.

In general, Apple doesn’t allow to get leaks going out by any source but this time before everything is out and that will confirms on 12th September. Apple chooses the same date for iPhone 8 launch when iPhone 5 launched in 2012 on 12th September. In most of the pics that were leaked during these few months about iPhone 8, we saw that Apple removes the home button which is act as a mark for the iPhone and makes unique from all the smartphone. This is might be the wrong decision by Apple if it is true but they remove this home button to get a bezel less display.