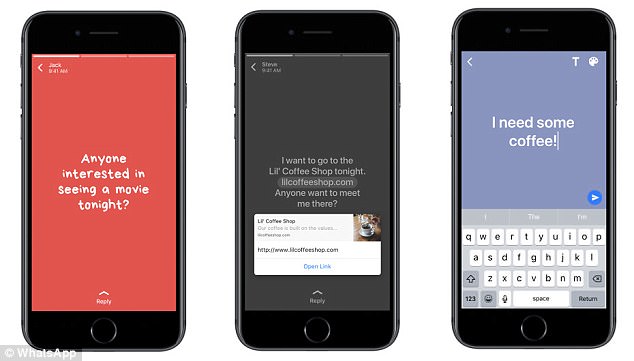 WhatsApp launched its new feature “Coloured Text Statuses” for Android as well as iPhone users. After testing in beta version for a while, WhatsApp launched this feature. This coloured text status feature already launched by Facebook in their Facebook App. In this feature, the user can upload their status in a coloured background with text and emoji.

WhatsApp confirms that the “Coloured Text Statuses” is rolling out and it available for all Android and all iPhone users. This feature was seen by many users but so many users weren’t able to see this feature in their WhatsApp so don’t panic, WABetaInfo reports says this feature is remotely pushed to all the users and those who are unable to see this feature will get update for that and they can update it from Playstore or  Appstore. iPhone users can use this feature by clicking the pen icon showing next to the camera icon on the new status bar, after clicking on that a new screen will open where the user can write text, add emoji or change background colour for their status.
When you finish adding text or emoji to the status then just click on the green arrow at the bottom to upload your status as same as you sending any media to your friend.

For Android, the pen icon will display on the status screen, just above the camera floating button and add text, change the background colour and add emoji to your status. The tipster confirm’s that this coloured text feature doesn’t support any Windows smartphone and it is also not supported on the WhatsApp Web. On web client, you can only see the status of your friends but can’t create.
Share4Tweet3Send