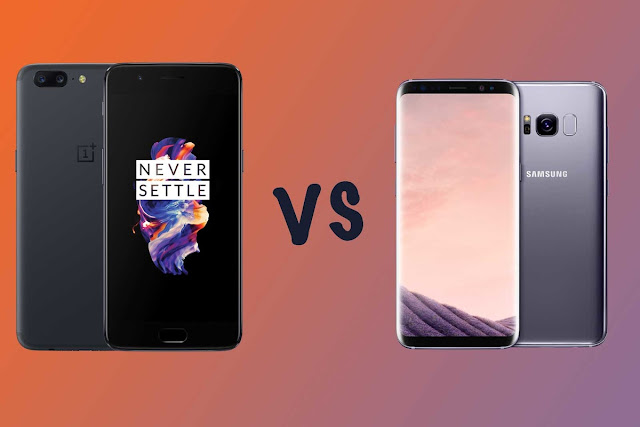 Recently, Samsung launched its new flagship phone, Samsung Galaxy Note 8. Samsung builds this device perfect for both cases, performance as well as design. This device has a Bezel-less display with curved glass that gives a perfect handy look for the users. Whereas a flagship killer by OnePlus also launched in 22nd June i.e., OnePlus 5. This device is one of the most popular flagship devices for customers that performance is incredible. OnePlus craft this device good in all manner and as per its older flagships they should make this perfect, they also did.
Both the device were good at their places and their fans also liked it too. Some of the buyers were confused after Note 8 launch that, which flagship device is better? Today we are sharing comparison between both the device to clarify everything between this two device.
Design
OnePlus 5 has classic and good design as similar as OnePlus 3 and 3T from the front but from the rear end, it looks similar to Oppo R11 which looks similar as iPhone 7 Plus. On the other hand, Samsung Galaxy Note 8 is a natural beauty. Its screen passed all the screen test for preventing screen damages. But Samsung Galaxy Note 8 is the water resistant smartphone as well as IP68 dust resistant.
Display
OnePlus 5 make no change in display it has 5.5” inch FHD display from its OnePlus One phone. But Galaxy Note 8 offers a 6.3” inch super Amoled dual curved display. Lets us talk about the display of both smartphones, Galaxy Note 8 offers their best display in their phone but Oneplus 5 will surely look like a simple display. Samsung used the latest bezel-less display in Samsung Galaxy Note 8 makes the OnePlus 5 display looks outdated in front of it. 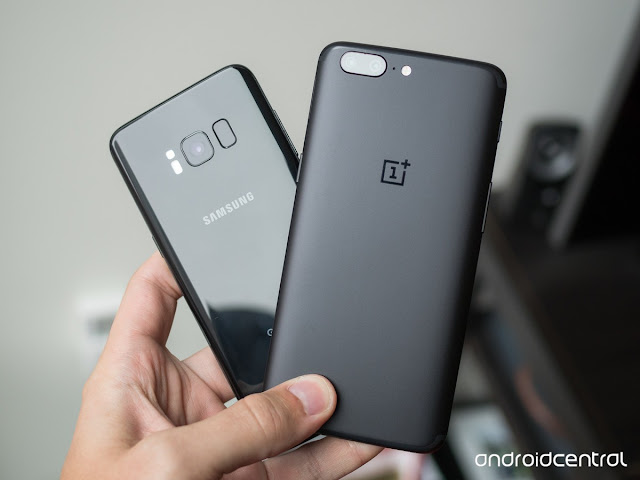 Software And Performance
Both Galaxy Note 8 and OnePlus 5 offers latest Android 7.0 Nougat. Samsung offers many features like Samsung Pay, Split screen view, Samsung health and all Microsoft Apps. Galaxy Note 8 is not that Android smartphone which you will get bored within a month of usage. Samsung offers Bluetooth 5.0. in which you can connect 2 smartphones, 2 Bluetooth speakers, 2 Bluetooth earphones at a single time. On another hand, OnePlus 5 offers the simple Bluetooth device which connects only one Bluetooth device.
Both OnePlus 5 and Galaxy Note 8 powered by latest Qualcomm Snapdragon 835 processor. Where Oneplus 5 has 6GB RAM which shows that it is the best performer where Samsung Galaxy Note 8 has 4GB RAM which is less as compare to OnePlus 5 RAM. OnePlus 5 easily beat the Samsung Galaxy Note 8 in benchmark score but their experience is similar. OnePlus 5 has very low cost as compare to Samsung Galaxy Note 8.
Camera
Galaxy Note 8 setup a dual lens camera. One is a wide-angle lens with f/1.7 and second is a telephoto lens with a f/2.4 aperture. These camera features are also available in Galaxy S8. It sports 12MP + 12MP camera combination with the sensor which is used for stabilization. While OnePlus 5 also have the dual camera but it has better camera performance as compare to Note 8because OnePlus 5 has 16MP + 20MP camera combination. In this instance, one camera is a telephoto zoom lens with a smaller aperture f/2.6 with 20MP camera and sensor while another camera is the 16MP camera with the aperture of f/1.7.
Battery
If we compare battery of both smartphone Galaxy Note 8 will surely disappoint us because it has average battery performance. When we use 4G VoLTE and Wi-Fi Then we will charge the battery twice in a day. Galaxy Note 8 has 3300mAh battery. Where OnePlus 5 has better battery performance as compared to Galaxy Note 8 because when we Use 4G VoLTE calling and Wi-Fi throughout a day then we will charge battery only once in a day