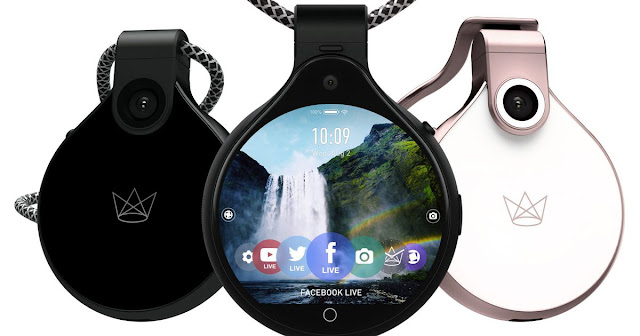 The live streaming generation just reinvented by the FirstRow, made by a wireless device maker Ubiquiti Network. This is a camera necklace with two cameras one is primary and second one is for an alternate view. This is just reinventing live streaming with the help of ‘Story mode’, that capture the moments in images and makes the video in Time-lapse.

First-Row is based on Android so that it can run a number of apps including native like a compass. It has a circular touchscreen for direct access to the apps and along with that user can directly stream their daily life on Youtube, Facebook or Twitter. This device can last up to 16 hours on ‘Story mode’ whereas it can last long for 50 hours. It just made capturing the moment so easily that user just has to power on and select the mode that’s it. It also has a speaker for audio output and a media button. Its primary camera is the 8MP and secondary camera is 5MP for an alternative view.

“Although FrontRow’s user experience and graphical user interface are unique, its underlying operating system was designed to be Android-compatible in an effort to open up 3rd party application development.” said Ubiquiti Labs.

These are the lines said by Ubiquiti labs on FirstRow. In hardware, It comes with a 2GB RAM and 32GB Internal Storage for video recording. For all of this Ubiquiti Labs set its pricing for $399.99. Users can buy this device from Amazon.com (US only).